You are here: Home / Travel / Edinburgh Weekend with David Swenson

I’ve just got back from Edinburgh after the most wonderful weekend of Yoga with the inspiring David Swenson.

We flew from London Southend to Edinburgh on the Friday morning and then took a tram into the city centre to our hotel. Getting around Edinburgh is easy, the tram system works really well and is easy to navigate but I’d highly recommend putting your walking shoes on and taking a wander!

We were staying in the Premier Inn on Princes Street, opposite Princes St Gardens. Seeing the gardens brought fond memories flooding back of spending my 21st Birthday in Edinburgh, I fell in love with it then (over 8 years ago!!) and I did all over again this weekend.

We checked in and dropped off our bags and wandered down to the studio where the workshop was being held; Union Yoga. We were very pleasantly surprised by the studio. It’s bright, spacious, organised. It was kept very clean throughout the weekend despite the sheer number of people and over all, very well run. All the people involved were helpful and friendly and couldn’t do enough for us.

There were 80 people to fit into the studio so mats were lined up in a way that we would all get the most from the class and we were given name labels to put on our mats (brilliant idea! I’m awful with names this was useful even for me!), and as people started to pour in the energy grew as an excited buzz took over the room. 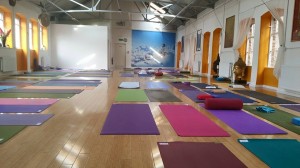 David Swenson is a ray of sunshine, he’s a ball of positive, inspiring energy and his wisdom and knowledge are outstanding. He makes learning about Ashtanga fun, and I could listen to his stories about Mysore, his journey through yoga and Sri K. Pattabi Jois all day!

That first evening David talked us through the building blocks of Ashtanga Yoga; the basic elements of Breath, Bandhas and Vinyasa, followed by an introductory flow through an abbreviated sequence from the First Series.

On the Saturday morning we got up bright and early for handstands and breakfast (overlooking Edinburgh Castle) then wandered back to the studio for 9am for a fully conducted Primary Series class, and boy was it a tough one! The energy in the studio was infectious and everyone was really into it and giving it their all, it was a truly wonderful class.

After lunch was a class focussed on jumping through, with lots of partner work (which I still cannot do but I learned a technique or two that will deepen my practice – I’ll get there one day) and handstanding, in which I learned some great tools for assisting my students! There was a lot of laughter and fun and high energy.

In the evening we had some discussion and insight into Ujjayi breath and Bandas, and in the environment with so many others, it was a deeply moving class. As David said, the breath has no language, it’s universal, and to hear so many yogis from all over the UK (and a couple from further afield in Europe) breathing in unison as we moved together was the kind of experience that I won’t forget.

Sunday morning the aches and pains (the good type) really started to set in! We checked out of the hotel and set off for Union Yoga once again for an introduction to the intermediate series of Ahstanga yoga.

After lunch was Inversions and back bends – which was the driving force behind us going really. There was plenty more fun partner work and lots of laughter. Backbends were completely redefined as opening the front of your body, which has given me a whole new perspective on how I practice them. We also learned the ‘James Brown’ technique for coming out of a back bend (squeeze your knees together and engage your quads).

Unfortunately, we couldn’t stay for the final class as we had a flight to catch *sob* but I have already booked in to do David’s brother, Doug’s workshop in London in November! I got so much out of this weekend, it was a huge inspiration for my practice and for my teaching career.

We didn’t get to see much of Edinburgh as the weekend was pretty full on, and I’m still aching today! But I fully intend to head back for the Edinburgh Festival next year!

20Yoga Teacher Training in BulgariaYou are what you eat?

She thinks she’s something special

Blocking, for my Sanity

No tech before bed…

You can keep your Fendi Shoes!

For Roger, he liked it here